From 0:00 to 24:00 on March 8, 2020, Anhui Province reported no newly confirmed cases, no newly suspected cases, and 3 newly cured and discharged cases. 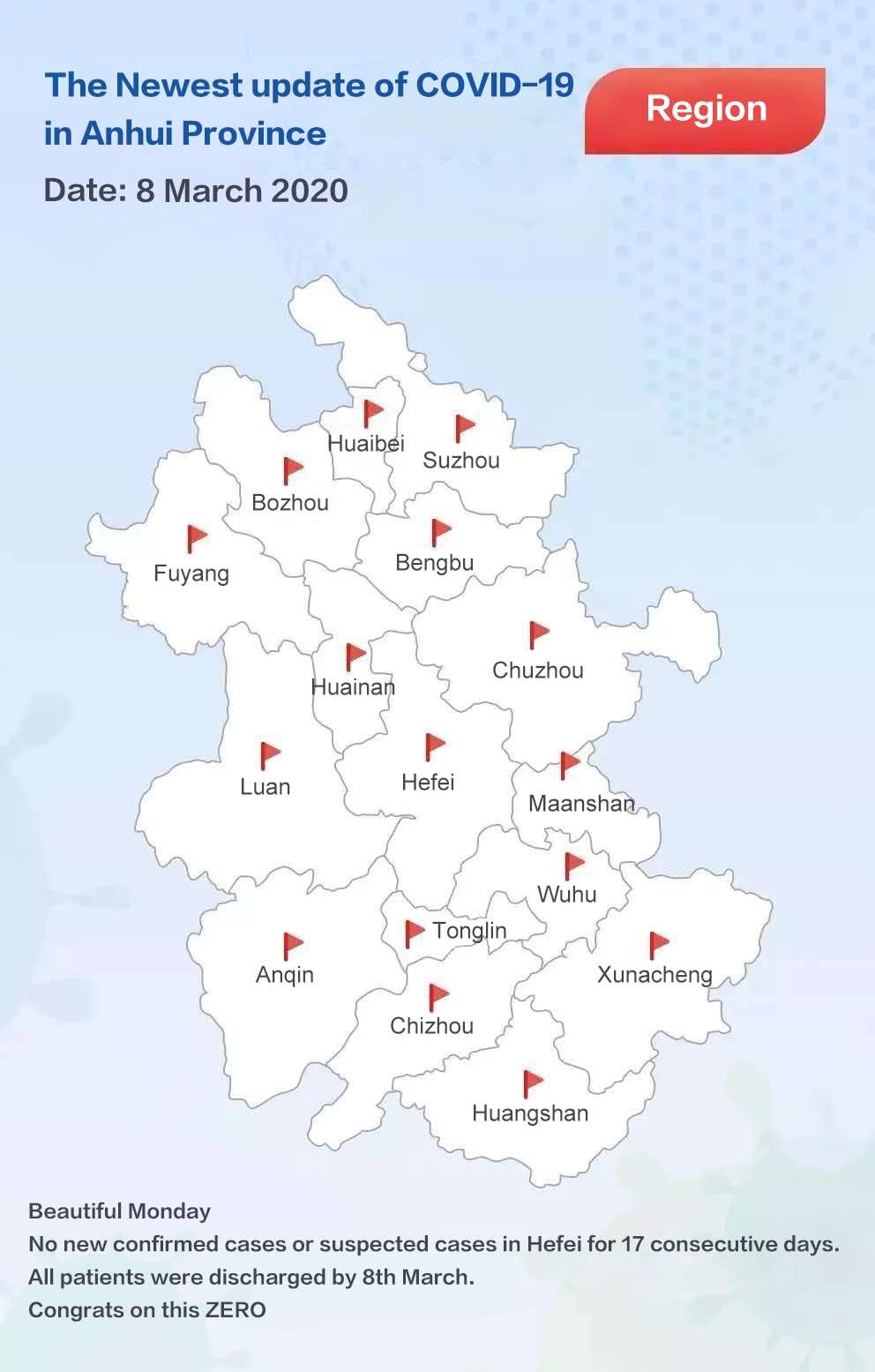 As of 24:00 on March 8, 990 confirmed cases, 984 cured and discharged cases, 6 dead cases, 28475 close contacts and 432 under medical observation have been reported in Anhui Province.
In 16 cities of Anhui Province, all the confirmed cases have been cleared, and the cure rate is 99.4%.
This ZERO takes a lot of strength and effort, we see covid-19 as a battle ,a nationwide battle.
China's counterattack can be replicated, but it will require speed, money, imagination and political courage.
Every single men/women is mobilized,it's fear of the virus that was driving us.
Now it's all about speed.
Back

The health of employees is the company's greatest wealth and the guarantee for the company's stable development. In order to ensure the health of employees, create a good working and living environment, and improve employee welfare guarantees, SAGA CNC arranged a physical examination for employees on July 26, 2022. And it's all Free !!! This cooperation unit is the Meinian Health Checkup Center with advanced and complete checkup facilities and strong technical force. The company aims to let employees know their own health status in a timely manner through physical examination, so as to achieve early knowledge and early prevention of disease, and early conditioning and early treatment of disease.

Main Features : SAGA's sheet cutter cuts paper up to 480mm x 330mm and accurately positions the paper. It can feed 50 sheets at a time (according to the thickness of the paper). A wide range of printable self-adhesive materials are available, with a maximum contact pressure of up to 500g and a maximum cutting speed of up to 500mm/s, and the ability to mix cutting materials with different materials. SAGA's sheet cutter is the ideal equipment for many business areas such as copy shops, product labels, and office applications. 1. The maximum cutting area is A3+ (483mmX330mm),catering to market demands perfectly 2. Optimized auto feeding system, more efficiency and no jam 3. Auto-recognition of registration marks guarantees scanning and cutting accuracy

[Love Donation Help Fight the Epidemic] The current situation of COVID19 is severe and complex Workers from medical system and frontline volunteers stand up and shoulder the burden Build a solid safety barrier for the citizens A group of business owners and members of the self-discipline committee in Liandong U Valley, Baohe District show themself Delivering supplies to the frontline workers Warm-hearted actions of caring enterprises and caring people Brings a lot of warmth to this "cold spring" On the morning of April 23, 2022, the Self-discipline Committee of Enterprise Owners of Liandong U Valley in Baohe District delivered condolence materials to Luogang Street and Beidou Village in Baohe District, expressing deep respect to the medical workers who are fighting against the epidemic day and night. . The road to fighting the epidemic has never been fought alone. Beidou Village and Luogang Street expressed their gratitude for the donations made by caring enterprises, and said that the medical staff who are fighting on the front line of the epidemic will turn the care and support of the whole society into the driving force for continuing to do a good job in epidemic prevention and control. Resolutely win this battle of epidemic prevention and control.

"For such a long time, we do the package diecut and crease with printing the mark points in Digital packaging industry  , and then by scanning marked points in front of the materials to get the contour line for creasing and cutting, especially the procedure with creasing/indentation, it is inevitable damage the media, often occur with irregular line and Critical edge, not even mention the display, For High standard packaging requirements are more unacceptable.Besides, the traditional indentation process is through the back of the operation, which has been the weakness of digital die cutting for indentation , so we want to solve this, to achieve the whole process fully automaticly, and we're honored, we made it." -- Senior Manager of Product Development of SAGA ASF420 a digital auto die-cutting equipment that integrates paper feeding/scanning creasing and cutting systems. Based on the company's AFC series, many details have been optimized, but it is far from a self-feeding digital flatbed cutting machine. Subversive innovations have been made in output software, control system, tool selection, and sweep mode. The scanning and running speed are greatly improved as well as the down force can be up to 1900g, and the rear creasing + die-cutting is perfectly realized.It's the best choice for all packaging company and assistance for after printing industry.  1: Digital die-cutting crafts which meet mass production process standard 2: More intelligent interaction with 7-inch touch screen 3:4 tools in 4 combinations 4:Automatic induction lifting feeder combined with independent paper feeding system  5:Feeding, REAR scanning and REAR cutting separately with non-interference 6:Wider application scenarios with wider format and thicker material 7: More medias can be placed up to 18 CM stacking  8:The speed are greatly improved both on scanning and running